– Band together in the exciting online co-op fighting!
– Create or join international guilds to team up with your friends, or convince the enemies to join your side
– Strategize together! Chat with your guildmates to how to attack and talk tactics
– Raid and rush against other guilds! Fight in epic matches of 20v20!
– Join the skirmish mode to face your enemies in real-time battles
– Dominate the seasonal rankings and show off your skills
– Level up your hero power to help your guild grow
– Customize your hero with unique weapons and cosmetics, or get a mount to tower over the battlefield and boost your attack!
– Roll the dice, attack, and crit! Collect shields to enhance your defense
– Send gifts to your guildmates and allies to boost their progress or help them to win in the battle arena!
– Become the guild champion! Play with your friends and support them in dice battles!
– Crush your rivals by stealing their gold

Cooperate, compete, turn failures into victories, and fight together! Are you ready to roll?

Please note that although Slash & Roll is free to play, our users are able to purchase virtual items with real money. If you don’t want to use this feature, please disable in-app purchases. 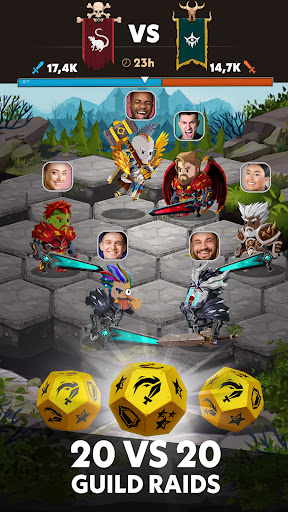