Welcome to this amazing hyper casual running game called ‘The Octopus Squid Game’. Octopus Squid game is a 3D action adventure survival royale game where you battle against your other players to win money! 🦑

Red lights, green lights. Whoever wins this game will win a lot of cash prizes. With money, you can purchase new items and unlock new stuff to make your player stand out more! Be the last man standing – winning more rounds will make you compete with better players and the difficulty will increase for each round.

The Octopus Squid Game 3D combines arcade and casual features. Ultimate endless levels keep you hooked for hours! This is a 3d arcade game where players have run for their lifes, but when the red light comes on they have to stop and stay still or else they get eliminated.

Your job is to run for your life and stop when it’s on the red. The most addictive casual game there is with optimized performance for all devices! This is an amazing journey to play obstacle runner games.

Just single tap to move forward or swipe left or right to move.

Unlock NEW items for the playable characters! Addictive & free to play game. The Octopus Squid Game 3D: Squid Game is an exciting fun game with an endless mode. Enjoy your duties and try to win! Do you have what it takes?

The Octopus Squid Game 3D: Online Survival Royale Game is super fun and addictive one-touch casual game. Run for your life! At present, each room supports up to 30+ players at the same time. Your goal is to avoid the dangers of each round, survive and try not to become a burger! Win cash, unlock items and be the best of the Octopus squid game. Sit back and relax in this free to play and satisfying time wasting game! Octopus Squid Game 3D is the number one Octopus squid game out there!

Finish or Die! Winner takes it all. Join the trending Octopus squid game no!

💠 The Octopus & Squid Game 3D: Online Survival Royale Game is An exciting adventure waiting for you to win that billion💠

Enjoy the colorful adventures at the obstacle running game! Enjoy this amazing game where you have to run for your life and win. Stop on Redlight move on Greenlight! Can you survive? Good luck!
– Updated the game for older devices.
– Taken some feedbacks from users, added sound effects.
– The Green Light, Red Light mode has been improved.
APP ID: com.Sk.OctopusSquidGame3DOnlineSurvivalRedLightGame 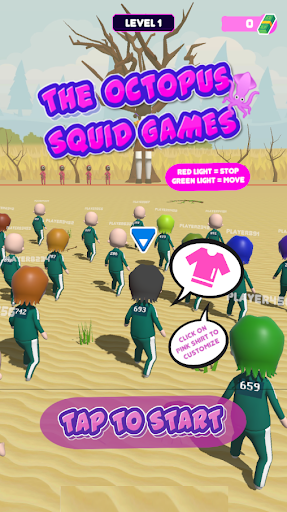