The best super hero game where you can use the full arsenal of super powers from flying to telekinesis.
or
If you are into fighting games, you will appreciate this offline simulator. All super powers are available because you are an ultra-superhero – the only one hope of humanity.

Except for the precise and fluid control in this shooting game, there are plenty of real opportunities:
– Full freedom of your actions on the map: you can shoot, fly, climb, driving the car, fight with criminals
– The real 3d city with racing cars, pedestrians, skyscrapers
– Superpowers that can be improved: air flight, telekinesis, eye lasers shooting, superkick, rope and hooks
– The breathtaking main set of military quests and extra storylines with great awards
– Wide variety of soldier weapons
– Amazing costumes, capes and accessories just for the real gangsters
– Supercool racing cars, trucks, military tanks, helicopters which can be easily transformed into robots
– Abilities such as flying, shooting and telekinesis you will implement into fighting and making tactical decisions
– Low performance requirements and small application size
– Different districts of the town with their own fractions
– Smart foes, who are the real threat for a society
– Incredible physical abilities such as a super kick, eye laser shooting, climbing with the help of a rope and hooks to make your enemy run away from the city
– Unbelievable accuracy in using an entangling rope and a hook

The best superhero gun games make you feel like you’re actually embodying the powers and responsibilities of a real top soldier.
This game is suitable for both, boys and girls. It’s really a fantastic opportunity to become a flying hero you’ve always wanted to be. You are free to use any tool you have in a wide range of super abilities. Laser eyes will destroy your opponent in a heartbeat, different combinations of super powerful weapons will definitely help you fight endless troops of iron creatures. A special type of heavy damage will provide the destruction of criminals with a single blow. The epic battle will take place in the streets of the city, where the wrong choice may have fatal consequences for everybody. Imagine you are right there in action, punching bad guys, using all your super cool gun for rescuing innocents before the villains establish the dominance in the military city!
This is the best flying game for mobile phones without doubts!
Would you like to know what else you can get?
– You’ll be able to develop your character, improve skills, shooting weapon, clothes, cars
– Also, there’s a way to customize it, to make you feel like one and dive into the military atmosphere of this no wifi military simulator
– There is one ground rule: there are no rules at all! You can fulfill the destiny of your hero in quest tasks and let the story go according to the plot or you can fight with soldiers in fatality battles, fly in the air, climb the skyscrapers with the help of the rope, drive the car, use eye lasers as a weapon and simply enjoy the gameplay.

Stop being just a usual man, when you can be a unique street fighter with ultra-skills! This cool 3d game needs such a superhero like you!
Download this cool car game for boys to feel like a real flying superhero! Remember the gangsters never sleep…
What are you waiting for?!
– Bug fix
APP ID: com.naxeex.nax.superhero 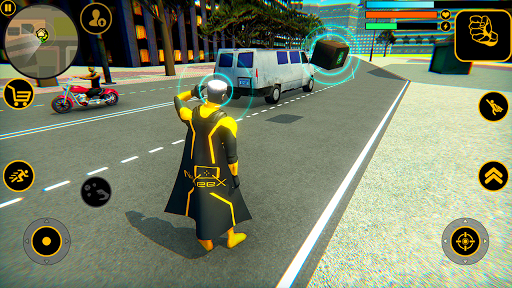 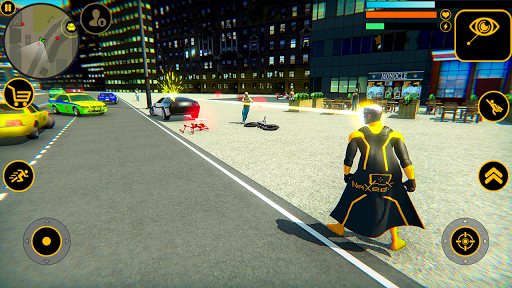