Fnf Skid and Pump Friday Funkin Night mod Test is another part of the popular game. Here you can try to play as Skid and Pump – little kids in Halloween costumes. The skeleton costume is worn by Skid, and the pumpkin costume is Pump. The heroes appear at Girlfriend’s parents’ house, where they challenge Boyfriend to win Girlfriend’s heart. How the musical battle ends is up to you.

With the help of 4 buttons and Skid and Pump, you have to create a unique track that will help not only to win the musical rap battle, but also to win the heart of a Girlfriend. Friday Funny Mod Skid and Pump is a simple and addicting game.

At the end of each round you will be shown the score, the more points you collect, the better. Try to compete with your friends, it’s always fun. See who gets the most points.

Fnf Skid and Pump Friday Funkin Night mod is just the beginning, in the next one you will find more mods and characters. Leave your feedback, they are important for us and the future game. Thank you!
APP ID: com.SkidandPumpFNF.FridayFunnyModSkidandPumpFNF 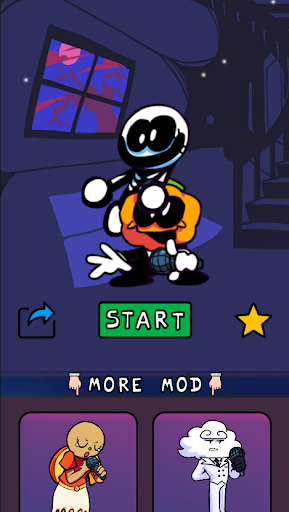