This game is about hero soldiers in the Sinai defending the civilians from the bad enemies.
• As the enemies are fighting the soldiers while serving (the player does their part), the soldiers must defend themselves and the civilians.
Serving soldiers in North and South Sinai to protect civilians from enemies … In ambushes, soldiers keep the fixed ambush, and soldiers cannot move from their place but they receive a warning call from the brigade that “enemies will come to fight you and you must defend yourself” and soldiers can see the enemies come from Far away in their own car (Toyota). When the enemies are seen in the car, the soldiers (the player) must resist them to victory, either by hitting the car or the enemies when they get out of the car.
Also, the defect sometimes may be assigned to sniper missions to free the prisoner from the oppression of the enemy.
But if the soldier (the player) controls an armored vehicle or a tank, he must aim at the hostile vehicle before the enemies descend from it … based on the order of the commander-in-chief.
The difficulty level in the game increases if the player’s service is inside the cities, and it may be difficult levels, but the enemies are few.
As the levels rise, the difficulty in the game increases, and the soldier (the player) is promoted to a higher rank.
• The game was made by one person and not by a team. The design of this game took about 4 months.
The game is 100% Egyptian drama.
• Encourage me with 5 stars and you will see the best and more. I cherish your opinion!
• Note: If the game reaches more than a million people. there will be a new version of this game in (Iraq and Syria) ^ _ ^
• إضافة قائمة الإرشادات
• زر لتنشين التلقائي
• تصحيح كافة الاخطاء
• حل مشكلة بطئ فى اللعب
APP ID: com.MMA.TheOverallProcess 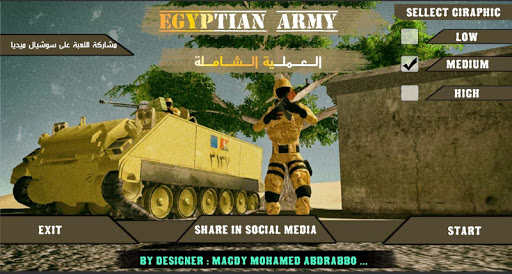